On a recent trip to the island of Kauai in the Hawaiian Islands I had the wonderful experience of exploring the beautiful Allerton and McBryde Botanical Gardens while on the Discovery Combination Tour. Located on the south shore of Kauai in the Lāwa'i Valley between the McBryde Garden and Pacific Ocean, Allerton Gardens encompass approximately 80 acres.  Allerton was the home of Hawaii's Queen Emma in the mid-19th century and was then passed to the McBryde family.  In the late 1930's, the grounds became the estate of Robert Allerton and his son, John Gregg Allerton. On August 19, 1964, President Lyndon B. Johnson granted a charter to the National Tropical Botanical Garden for the preservation of endangered native species.  The site is now maintained as a non-profit organization dedicated to the study and preservation of endangered tropical plants and protection of the world's diverse ecosystems. Encompassed in a world of rain forests, native fruits and spices, hidden waterfalls and Jurassic trees, Allerton and McBryde Gardens will continue to provide a tropical paradise for visitors of all ages.
In 2003, NTBG began an ambitious restoration of an area known as Lāwa‘i-kai including the beach and adjacent coastal forest in the Allerton Garden. The project’s first goal was to remove invasive alien plants which had crowded out most native strand plants and had threatened the Hawaiian green sea turtle's (honu) nesting areas.  The goal was to create a vegetative barrier to alleviate damage from tropical storms such as the tsunami and two hurricanes that had struck the area previously and to create a stable habitat for a wide array of highly endangered native plants, after removal of alien invaders.  The landscape was developed through the study of fossil and historical records to replicate the type of environment that would have existed a millennium ago.
Many of the plants, including rare palms, trees, and shrubs native to the island, now thrive in Allerton Gardens. The Alula is one of the garden's conservation successes.  Having lost its natural pollinator the species was near extinction. NTBG botanists traveled to steep cliffs to collect pollen and hand cross-pollinate wild plants to generate fruits and seeds for germination.
This rain forest and its species resemble the environment a millennium ago during the days of the first Polynesian inhabitants.
As we walked through the gardens we experienced unusual tropical palms with thick aerial prop roots...
attractive red seeds produced from native palms...
This beautiful flower known as Torch Ginger can be seen throughout the island in shades of red and pink.  Although ginger is not native to Hawaii the plants in the ginger family (Zingiberaceae) grow very well on the islands.  The red flowers are more visible but if you look carefully into the brush you may also get a glimpse of the pinks.  A much rarer white torch ginger can be found growing in the McBryde Garden above the 'Spice of Life trail'.
The McBryde Waterfall located at the border between the Allerton and McBryde gardens is a must see.  This waterfall was featured in the movie 'Pirates of the Carribean' and rightfully so.  It is a hidden away treasure in the gardens and its beauty is breathtaking.  While touring the gardens, our guide took us through the rain forest to see this marvel of nature.
A wooden bridge crosses over to the beach where we had the rare opportunity to view the nesting site of the endangered green sea turtle (honu), which is being protected by the National Tropical Botanical Garden (NTBG).
Does this Look like a scene from Gilligan's Island?  The opening scene to the well known television series from the 1960's was filmed here.
Here our tour guide discusses the various native plants and species preserved here in the gardens.
Above is the Hala tree, which is native to Hawaii. Several parts of the tree can be utilized, but in Hawaii the most common use of Hala are the leaves.The leaves of the Hala tree are woven into various objects such as mats, baskets, hats, canoe sails, and bags. The leaves were also once used to thatch houses and homes for animals.
The Hibiscus is the official state flower of the Hawaiian Islands and means "delicate beauty". In Hawaiian culture it communicates power and respect and is a symbol of old royalty. Traditionally, the flower is worn behind one ear, behind the left ear signifying that a woman is in a relationship and is uninterested in attracting a man, whereas tucking the blossom behind the right ear announces that a woman is available.
If you have ever seen the movie "Jurassic Park"  then you have noticed the very large prehistoric looking trees in many a scene.  These are the actual Moreton Bay Fig trees that were used on site for most of the filming.
I was able to get a picture standing by one of these magnificent and majestic trees so that you could get a feeling of the size of its roots.  I felt like I was back in Jurassic time and oh what a thrill!
If this giant Pothos plant looks familiar to you it is probably a common houseplant in your area.  Invasive here in Hawaii it grows as a vine on native trees and poses quite a nuisance.   When the tour guide tested me as to what is was I couldn't believe the size of the leaves...jungle style!
These aerial roots are amazing as they cascade downward like ropes from the tree tops.  Many of the rain forest plants produce these root extensions to take in more moisture.
Plumeria is not native or Polynesian-introduced but it is one of the most well known and favorite trees in Hawaii.  Beautiful fragrant blooms range in color from bright white (most fragrant) to yellow, pink and red. Several beautiful Plumeria trees grow throughout the Allerton garden.

Posted by Lee@A Guide to Northeastern Gardening at 7:53 PM 18 comments: 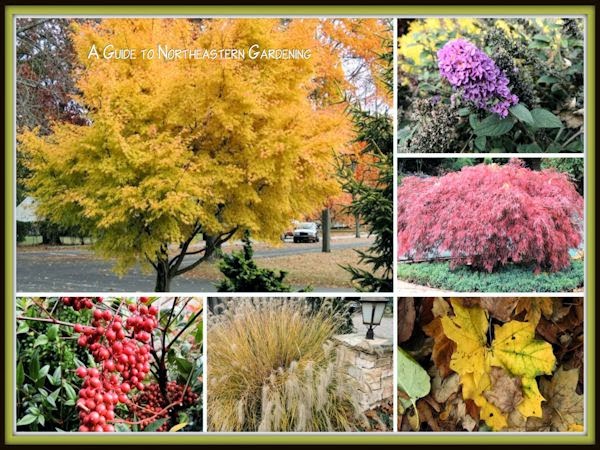 The first frost warning for our area in the northeast is this evening so it was time
to go out into the garden and start preparing it for the approaching winter.  Fall is a bittersweet time of year for me since I long to be in the garden as much as
possible and as the temperatures decrease I know the time outside is limited.  On
the other hand the colors of fall are spectacular and the gardens seem to come to
life one last time before they go into dormancy.  Before starting my fall clean up today I figured I would get some last photos. There are still a few blooms hanging on before it gets too cold so come take a look! 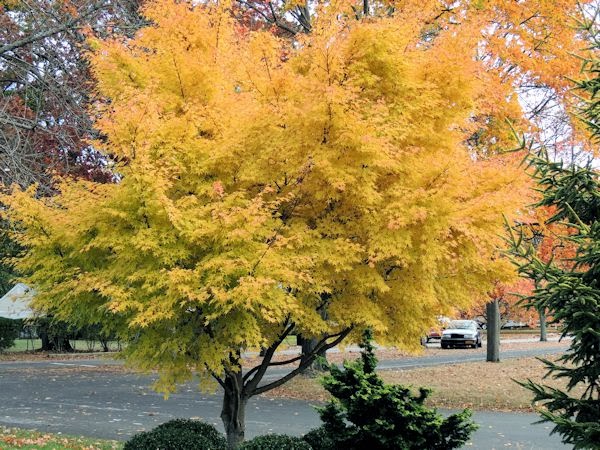 Posted by Lee@A Guide to Northeastern Gardening at 8:41 PM 14 comments:

I am now going through some photographs I took previously while revisiting Old Westbury Gardens during the month of September. Old Westbury Gardens are located on the North Shore of Long Island along Long Island's famous Gold Coast. The 23 room Westbury House Charles II-style mansion is the former country residence of the well known financier and sportsman John Shaffer Phipps, son of Henry Philipps of Carnegie Steel Company, his wife Margarita Grace Phipps and their four children. The meticulously maintained mansion and gardens are breathtaking and they are one of my favorite places to visit.

Even though it is fall at Old Westbury Gardens the blooms are abundant.  I was able to get this close up of a Butterfly Moth enjoying the nectar of this beautiful flower.
The massive bloom of this Dahlia took my breath away. It must of been at least six to seven inches in diameter and certainly one of the most magnificent blooms I have ever seen so I had to capture it! ﻿
The beauty of nature never ceases to amaze me with the perfection of this flower.  A repetition of perfectly alternating petals makes this bloom a product of nature's artwork.
One of my favorite places to visit on the grounds of Old Westbury Gardens is this beautiful thatched cottage and garden. The quaint English-style cottage and garden was a gift to the only Philipps daughter Peggie for her tenth birthday in 1910.﻿
An abundance of colorful blooms from numerous perennials and annuals can be seen at every visit.﻿
The "Temple of Love" is a romantic 18th century designed stone gazebo with a lace-like wrought iron roof which creates the perfect spot for a photographic moment. Bordering the pond a glimpse of the back lawn and mansion can be seen as a reflection in the quiet water.
One of the additional highlights to Old Westbury Gardens is the magnificent Walled Garden with an expansive pergola and lotus pond. The gardens consist of an assortment of evergreens, flowering shrubs, perennials, ornamental grasses, bulbs and annuals that offer a beautiful display in all seasons.
The lotus pond is the home to Koi fish and Lotus blooms.
﻿
I wait in anticipation until my next visit to this beautiful part of Long Island heritage. Old Westbury Gardens, Inc. was formed in 1959 in order to preserve the mansion and gardens. Open to the public, Old Westbury is partially funded by an endowment while the operating funds for running all educational and cultural programs is derived mainly from admission fees, the annual appeal, membership, corporate and foundation grants, gifts and donations, as well as special events. I feel fortunate to have these magnificent gardens and mansion so near to home and am in awe every time I encounter them.
For more information visit Old Westbury Gardens.
As Always...Happy Gardening!
Author: Lee@A Guide To Northeastern Gardening, Copyright 2013. All rights reserved

Posted by Lee@A Guide to Northeastern Gardening at 8:00 AM 8 comments: