I hope you enjoyed this month's tour through my garden. Special thanks go out to our hostesses Carol at May Dreams Gardens, who makes it possible to see blooms on the 15th of every month with her meme Garden Bloggers' Bloom Day and Pam at Digging for hosting Foliage Follow-Up. I am also linking with some other wonderful hosts and hostesses at Floral Fridays, Macro Monday 2, and Nature Notes at Rambling Woods. Also check out Garden Bloggers' Foliage Day at Creating my own garden of the Hesperides, Wednesday Around the World, Dishing It & Digging It and Image-in-ing weekly photo share every Tuesday. 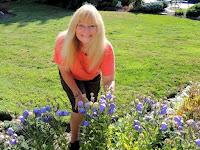 LOOKING FOR GARDENING IDEAS?~SHARING MY PASSION WITH MY BOOKS ON AMAZON~

Posted by Lee@A Guide to Northeastern Gardening at 12:00 AM 20 comments:

This Month's Color in the Garden October 2017: Chrysanthemum for the Autumn Garden

Autumn is upon us in the northern hemisphere and it's time for another This Month's Color in the Garden. For the month of October the feature color is orange and Chrysanthemum comes to mind, as it is a favorite fall addition for many a gardener, supplying a burst of color for the landscape as the temperatures cool.
Posted by Lee@A Guide to Northeastern Gardening at 12:00 AM 13 comments: