Welcome to my Long Island winter garden for the month of January. For this month's Garden Bloggers' Bloom Day and Foliage Follow-Up, I am going to step out of the box a bit and take you on stroll through my garden, then venture further beyond into the winter landscape. On a winters walk, one can experience all the hidden treasures that nature has to offer. As an avid lifetime gardener, I always try to look for the beauty present in all seasons and even though the landscape has mostly gone to sleep for the winter months, there is still much to be seen. Let's take a stroll.


I cannot remember such a mild start to January for quite some time. It has been a bit of a roller coaster ride with temperatures fluctuating from the 50's some days to 30's the next, so there have been warmer days here and there for walks around the community. Within walking distance from my home is a wetland area that is part of the Town of Islip (Suffolk County, Long Island, New York) Open-Space Preservation Program. Since the late 1990's, Suffolk County legislature has put aside greater funding for the preservation of over 12,000 acres of natural area on the island and continues to protect our natural resources to this day. I must say that I am proud to be a member of a community that values saving the natural habitat of many a species. Come along! The first encounter that gets my attention are these Birch trees with their beautiful white bark, which is striking in winter.


Mill pond is part of the Brown's River Estuary System, which is a shallow three foot deep pond located on the north side of Montauk Highway just east of the Long Island Railroad overpass in the town of Sayville. The six acre pond is the home to Largemouth bass, sunfish and many other inhabitants including ducks and swans. The pond is a seasonal migratory stopover for many species of wildlife.


These shelf (bracket) fungi are commonly found growing on rotting trees or fallen logs in moist woodlands. The sporophores can produce specimens growing up to 16 inches or more in diameter. There are many variations in color on these shelf (bracket) fungi. Although their appearance does signal the eventual demise of the tree, their interesting structure almost looks like artwork.


Eastern white pine is a native to the northeastern United States and originally covered much of the north-central and eastern forests of North America. Pines provide a habitat for a number of woodland creatures.


Rose of Sharon (Hibiscus syriacus) is a profusely flowering member of the hibiscus family which is hardy in USDA zones 5-8. The flowers turn into seed pods which become brown and dry when they are ripe. The pods will then split open to disperse their seeds, leaving the winter interest seen here.


American Sycamore is known for its lovely bark and production of round seed balls in late autumn that hang from the smaller branches. Did you know that the sycamore tree is considered as a symbol of protection and hope? In many areas of the world it is also looked upon as a symbol of strength, eternity, and divinity. The wood of the American sycamore has a variety of uses,including lumber, paneling, interior trim, furniture parts and butcher blocks. The inner bark has been known to treat dysentery, colds, lung ailments and cough.


There are more park and preserves all over Long Island. Here is a handy guide: Guide to Long Island Parks and Preserves.

I hope you enjoyed your stroll through my January garden and beyond. Please feel free to stay a while and catch up on some of my other posts. Special thanks go out to our hostess Carol at May Dreams Gardens, who makes it possible to see blooms on the 15th of every month with her meme Garden Bloggers' Bloom Day. Also, special thanks to Pam Penick at Digging who has hosted Foliage Follow-Up for all these years, a meme I will still continue to honor. I am also linking with some other wonderful hosts and hostesses at Floral Friday Fotos, Macro Monday 2, Nature Notes at Rambling Woods, Dishing It & Digging It on Sunday with Angie the Freckled Rose, Image-in-ing weekly photo share every Tuesday with NC Sue and Gardens Galore Link Up Party on the 17th with Everyday Living. I am also happy to join the Homestead Blog Hop on Wednesdays. 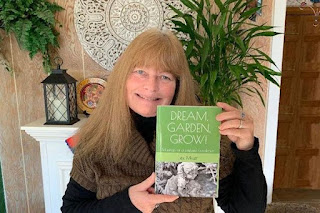 Check out my newest book Dream, Garden, Grow!-a collection of musings as I share memories of childhood and how I grew to become a lifetime gardener. Packed with stories about life, gardening, medicinal uses of plants, garden folklore, seasonal interest, sustainable and indoor gardening, you'll laugh and learn as you explore what makes a gardening addict and the meaning behind mysterious gnomes and garden fairies. While exploring, also learn about moon gardens, witty garden jargon and tried and true gardening tips. Whether you are a gardener or not, have a "green thumb" or "brown", Dream, Garden, Grow will not only entertain and amuse but will teach you inspiring gardening pointers along the way.

This Month in the Garden: Welcome to My Long Island Garden Year in Review-A Look Back at 2018