A Look Beyond: Blooms and Birds of Kauai, Hawaii

During the winter months I had sorted through some photos from a November trip to the island of Kauai and thought I would share some of the birds and blooms I encountered while there.  Kauai is truly a tropical paradise and the home to a huge variety of amazing wildlife and blooms.  Being an avid gardener and aspiring photographer, I ventured out on many walks with camera in hand during our trip in order to capture as many memories as possible through the eye of the lens.
Kauai is the oldest of the Hawaiian Islands geologically and is the fourth largest of the five main islands.  It is known as the "Garden Isle" and has an average rainfall of 50–100 inches annually.  Kauai is the home to many tropical rain forests and the constant rainfall allows the island mountains to be heavily vegetated. The majestic green mountains in the backdrop with tropical palms gracing the foreground make for a picturesque view.
I came across such a variety of birds on each stroll that I was amazed at what I was seeing.  I spend about twenty minutes or so slowly getting closer and closer to this adorable little sandpiper, which was living right at the resort.  During the same walk I also saw this egret. Neither bird likes to stand stationary and are both very fast moving, so I had to be patient and it took many attempts to get these photographs!
These cardinals were just outside the resort eating berries from a tree down the road.  They resemble our northern cardinals only they have a red head and gray and white body.  Also known as the Brazilian Cardinal, these tropical birds were introduced to Hawaii in 1930 from South America. The juveniles have a brown crest and black bill.
Red Crested Cardinals are often seen traveling in pairs as these two here.  They feed on seeds, fruits, insects and plant material.
One of my favorite plants in Kauai is this Red Ginger. The combination of foliage and bloom makes this a magnificent plant and the flower is interesting to photograph. Red Ginger is a tropical perennial with a native range that spans from the Maluku islands in Indonesia to the southwest Pacific. It was introduced to Hawaii in 1928.
These Tropical Hibiscus can be seen everywhere on the island and come in an amazing array of striking colors.  There are seven known species of Hawaiian hibiscus which are regarded as native to Hawaii. The native Hawaiian yellow Hibiscus (Hibiscus brackenridgei) is the state flower of Hawaii.
The varieties mostly seen for ornamental use on the island are of the Chinese variety (Hibiscus rosa-sinensis) and its hybrids.
It is wonderful seeing these beautiful blooms growing all over Kauai.  They can only survive as summer outdoor plants or houseplants here in the northeast.
Here is some more of the local wildlife. On one of my walks I spotted this little fellow who was a familiar sight, as we have sparrows in the northeast. I believe he is a House Sparrow.  In the resort areas the birds are so used to having people around that they didn't even budge.   As I got closer up with the lens I believe this little one was actually posing for me!
All over the island this pre-historic-looking plant can be seen.  The leaf belongs to Monstera deliciosa, also known as Swiss Cheese Plant.  These large plants can be seen growing at both the resorts and along the sides of highways.  Monstera grows way above the rainforest canopy and can develop huge aerial roots up to 70 feet in length.
I loved seeing and photographing these beautiful Plumeria trees. Plumeria are tropical trees famous for their gorgeous flowers which are used to make Hawaiian leis.  They can be seen everywhere on the island and their aroma of sweet perfume is wonderful!
These tropical lilies are amazing. Queen Emma Lily displays spiral-like flowers in either pink or white on plants that can grow to about five feet tall by wide.  The blooms are not only beautiful but are also fragrant.
Here are some Ixora, also known as Jungle Geranium.  Ixora can be found in hues of pink, orange or yellow and displays showy spikes that burst open into flowers and resembling geranium once opened.
In ancient Hawaiian culture the Ti leaf was believed to offer spiritual protection, and only royalty were allowed to wear them. Today the plant’s foliage is still a popular element in many Hawaiian religious rituals and is also widely grown for gardens.  Hawaiian Ti is also known as the "good luck" plant. Ti can be seen growing all over the island and was originally introduced to the islands when brought over in canoes by ancient Polynesians.
Doves can be seen throughout the island are are not at all camera shy, such as this one perching on a rock right along a walkway.

Posted by Lee@A Guide to Northeastern Gardening at 8:00 AM 14 comments:

March went out like a lion with snow on the 29th, resulting in a layer of white blanketing the first buds and foliage for the start of April.  It was the snowiest March on record for Long Island with 19.7 inches of snowfall and the transition from winter to spring has been slow moving. As temperatures gradually climb from being mainly in the 40's to some 50 degree days here and there, the past winter feels more and more distant. Spring is a wonderful time of the year as I wait anxiously for the first signs of life to emerge in the garden.  It is time for another Garden Bloggers' Bloom Day and Foliage Follow-Up to take notice of what is blooming.  Come along for a walk in my garden!
These miniature daffodils were perfect and now I can enjoy their blooms every spring. 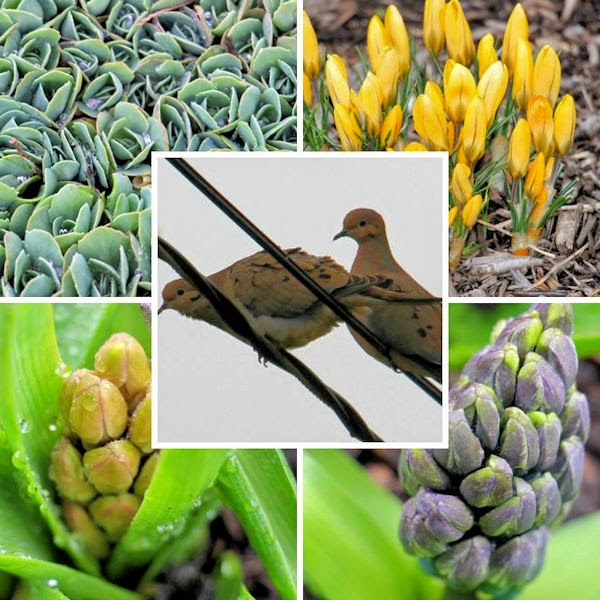 Thank you to Carol at May Dreams Gardens who makes it possible for us to have blooms on the 15th of every month with her meme Garden Bloggers' Bloom Day and Pam at Digging for hosting Foliage Follow-Up.  I am also linking with some other wonderful hosts and hostesses at Creative Country Mom's Tuesday Garden Party, Today's Flowers, Floral Fridays, Mosaic Monday at Lavender Cottage, I Heart Macro, Macro Monday 2, and Nature Notes at Rambling Woods.  I hope you enjoyed the visit to my garden.  If you leave a note I will know you dropped by, and will be sure to visit you as well.

Posted by Lee@A Guide to Northeastern Gardening at 12:00 AM 32 comments: