Lilies are a long-blooming welcomed addition to any landscape. They fit beautifully into just about any type of garden whether it is formal, cottage style or traditional. The true lilies or Asiatic lilies are bulb-forming perennials that belong to the family Lillaceae.﻿

Daylily or Hemerocallis belong to the family Hemerocallis that stemmed from the family Lillaceae. The botanical name for daylily means "beautiful for a day". Daylilies grow forming clumps with continuous blooms throughout the summer and into fall. They can be grown in zones 3-9 ideally in a rich most, slightly acidic soil in full sun. Whether you choose true Lillium or Hemerocallis either can be a welcome addition to your garden.

Lillium 'Stargazer' is known for its beautiful coloration and very fragrant blooms. 'Stargazer' grows in clumps that are 12-16 inches in width and reaches a height of 36 inches and blooms from July-August. It is hardy in zones 4 to 10 and prefers to be grown in full sun in a slightly acidic and rich, well-drained soil. 'Stargazer' can be easily divided by digging up bulbs and re-planting (best done in fall). 'Stargazer' is a prolific bloomer that thrives in the garden and is an excellent addition to any landscape.

Posted by Lee@A Guide to Northeastern Gardening at 7:20 PM 1 comment:

The summer garden is starting its' transition into fall.  There are signs of fall in the northeast garden with the aftermath of hurricane Irene that made landfall here on Long Island on August 28, 2011.  The trees seem to be losing their leaves earlier than usual and there is a degree of crispness in the air as the days grow shorter and temperatures start their decent. There is an unmistakable beauty to the changing garden that all can admire and behold.


The grasses are developing their wispy plumes and the Sedum 'Brilliant' is extremely vibrant this year.  Here is a combination of 'Hameln' fountain grass, Sedum 'Brilliant', Blue Star Juniper and heuchera (coral bells).  The coral bells thrive in the shadow of the grasses and are complemented by the blue of the juniper and pink of the sedum.
﻿
﻿

One of my newer Weeping Blue Atlas Cedars is finally sending out a leader branch that cascades gracefully over the gold mop cypress and dwarf butterfly bush.  It has been a good growing season and this piece is turning into a prize specimen.  I look forward to even more to enjoy as this tree matures. It is amazing how each one is so different.


The perennial garden takes on a new look in September.  Soon the colors will be turning to bright oranges and yellows.


The butterflies and bumble bees just love the sedum at this time of year.


Liriope is at its prime at the end of August and into September displaying its' bright grape-like purple blooms.


Thank you for stopping by and please also visit our hostess Carol at May Dreams Gardens for more September blooms from gardeners around the world and join all of us in celebrating our true passion and love of gardening.

"A garden is a thing of beauty that constantly changes and can be enjoyed forever..."   Happy Gardening!  Happy GGBD!

Posted by Lee@A Guide to Northeastern Gardening at 1:22 AM 7 comments:

Feature Plant: Heuchera (Coral Bells) - A Perennial for all Seasons 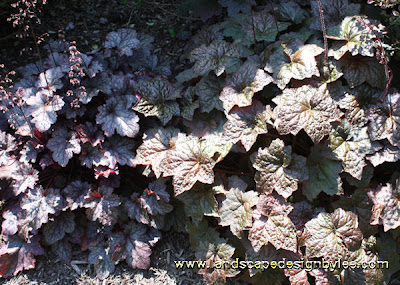 Over the years as a gardener and designer I have become intrigued with the beauty and endurance of heuchera in the garden. Known originally as a shade plant, newer cultivars of heuchera have proven to be more and more tolerant of a multitude of conditions. Heuchera (Coral Bells)  have made a significant rise in their appearance in gardens around the world, as newer varieties with dramatic striking foliage are cultivated. Heuchera can be grown in hardiness zones 4-9 in sun to part shade in a variety of soils. Heuchera come in a variety of colors ranging from green to chartreuse to yellow, red-pink and burgundy and serve as an excellent accent piece in the garden border, woodland or cottage garden.  Since this post was originally published in 2011, after seven years of testing these perennials, here are the results.

One of my all-time favorites for  its durability and color is the reliable Heuchera 'Palace Purple', a cultivar with large deep maple-shaped burgundy foliage that lasts from spring until fall and even into the winter months in zones 4-9. Spikes of creamy-white flowers emerge in late summer that resemble baby's breath. If kept in part shade, the color of Heuchera 'Palace Purple' will be deeper and more dramatic but when placed in full sun its' color will range from burgundy to possibly an orange-bronze.﻿  'Palace Purple' heuchera prefers a moist, yet well drained loamy soil. This variety has proven to be very hardy.

The next variety worth mentioning is Heuchera 'Plum Pudding'.  Plum Pudding is also tolerant in zones 4-9 and should be grown in indirect sun to part shade. The color of this heuchera is a little more on the plum side as the name indicates. I have found from experience that 'Plum Pudding' is less tolerant of full sun and does best grown in partly shady and moist conditions.  It's low mounding appearance and silvery-plum foliage also makes it an excellent addition in the shade garden.

A newer cultivar, Heuchera 'Caramel' has become my newest favorite in the garden. 'Caramel' is hardy in zones 4-8 and performs best in partial shade to indirect sun. Caramel' will eventually spread to one to two feet in width and produces light pink flowers in June-July. This cultivar prefers medium-moist rich soil and is more tolerant of sun than its predecessors. It will thrive in a northern or eastern exposure, and when in a southern or western exposure, it is best to give this plant some afternoon shade. I have found this cultivar to be highly successful in my zone 7 garden.

I introduced Heuchera 'Solar Eclipse' to my garden in 2011. Showing a burst of color in a shady spot, 'Solar Eclipse' displays broadly scalloped leaves of red-brown bordered in lime green. Hardy in zones 4-9, 'Solar Eclipse' is a vigorous clump-forming grower that also prefers moist rich but well drained soil in part to full shade. I found this particular cultivar to be a beautiful addition to a shady spot; however, its lifespan was limited as compared to the others.
﻿

Heuchera 'Citronelle' is a hybrid stemming from 'Caramel'. 'Citronelle' is a medium grower to twelve inches in height with neon yellow lobed foliage and produces white flowers in mid-late summer. It is hardy to zones 4-9 and to -20 degrees Fahrenheit and prefers to be grown in a moist loamy soil with good drainage. 'Citronelle' will tolerate full sun in a northern or eastern exposure. I have found that the leaves can scorch if in too much sun and would not advise planting in a southern or western exposure. Even though 'Citronelle' is supposed to be more tolerant of sun, I have found 'Caramel' to be much hardier.

Heuchera require minimal maintenance. The foliage of heuchera starts to emerge in early spring and lasts throughout the entire summer and fall. Foliage will remain throughout the winter but plants should be mulched for winter protection. An early spring pruning to remove spent foliage will encourage your Heuchera to form new growth. Heuchera display clumps of rounded, scalloped or fringed foliage that grows from 12 to 24 inches in diameter over time. Heuchera have been a favorite of mine for adding interesting foliage to the garden. There are approximately 50 varieties of Heuchera to choose from with new cultivars being developed yearly.

Since this post was originally written, there have been other exciting updates in the garden. For more information on gardening and design, check out my books:

Posted by Lee@A Guide to Northeastern Gardening at 3:01 AM 3 comments: