Today's garden tour travels beyond the Northeast. The Limahuli Garden and Preserve, located at the beginning of the Na Pali Coast on the north shore of Kauai in the Pacific west, has been named as the best natural botanical garden in the United States by the American Horticultural Society. The gardens are known to be the home of 250 taxa of rare and endangered native plants and birds (50 of which are on the verge of extinction), that are protected and maintained by the National Tropical Botanical Garden, an organization recognized for its outstanding involvement in the preservation of Hawaii's native flora.


Aloha and welcome to a virtual tour of the Limahuli Garden!
Entering the gardens, these ancient lava rock terraces are the archaeological remains of a large agricultural complex where Polynesians grew food for their communities.  The plants grown here are referred to "canoe plants", as many of them were brought over by early Polynesians as they voyaged across the Pacific to the islands by canoe.
The ancient Hawaiians constructed hale houses of tropical resources which were  highly abundant; hence, respecting and protecting the forest community of the Limahuli valley.


The smooth, waxy leaves of this familiar Polynesian plant served many purposes, including wrapping food for cooking or storing, thatch for houses, and as a material for rain capes and sandals. Ti was considered sacred by the early Hawaiians and was an emblem of high rank and divine power. It was worn as protection against evil spirits and was important in ancient ceremonial rituals.


Hibiscus is referred to as pua aloalo in the Hawaiian language and are seen growing all over the island. Many were brought here as ornamentals but the arnottianus variety are endemic to the islands.


This large fan-like tree is not a true palm but rather a member of the flowering plant family Strelitziaceae. The flower it forms in the center very much resembles the Bird of Paradise, as seen below.
The beautiful and unusual Bird of Paradise (Strelitzia reginae) came to Hawaii in the 19th century as an ornamental and continues to be an admired plant by many. It's striking colors and appearance of blooms resembling a bird's beak and feathers is intriguing.


The Plantation Era Garden is the home to pineapple. mango, papaya, fragrant plumeria, gardenia, colorful orchids, Bird of Paradise, ginger and heliconia.  These plants are not indigenous to the Hawaiian Islands, but were brought over from other locations less than 200 years ago. The enormous changes to the culture and ecology of Hawaii started in the mid-1800s after Captain Cook anchored off the islands in 1778. During the Plantation Period the local Hawaiian culture emerged, mixing old traditions with the customs of new immigrants.

Hala is a native plant of Hawaii that was used by early Polynesians for weaving into mats, baskets, flooring and pillows and also for the sails for canoes. These trees grow to a height of approximately twenty feet and produce thick aerial roots that spread into the ground.


Through habit loss and the competition of invasive species, Hawaii has lost many of its native species, but along the trails in the Limahuli Garden, remaining native species have been preserved and saved from possible extinction.
This Alula is an endangered species that is native to Kauai and extinct in other parts of the world.  Alula suffered a serious decline in population from Hurricane Iniki  in 1992,  which destroyed half the natural population, leaving only one remaining growing in the wild. The National Tropical Botanical Garden has made an increased effort in protecting and growing this endangered plant, saving it from extinction. An even greater treat is to experience one of these rare and unusual plants in bloom, which makes it even more amazing!
This Polynesian introduction was the dominant ground cover in the Limahuli forest.  The ancient Hawaiians used "awapuhi" for shampoo, medicine and to scent kapa fabric, which was made from the fibers of certain trees and shrubs. The plants we encountered were approximately four feet in height with unusual white blooms that emerge from large cone-shaped bracts.


Breadfruit or Ulu, as it is named in Hawaiian, was one of the few life-sustaining plants the Polynesians brought with them when they sailed to the Hawaiian Islands.The fruit and seeds of all three species are edible and very nutritious filled with vitamin B, calcium and complex carbohydrates. Ulu is known as the "tree of bread" in Hawaii.
This trail extends along the northern coast line of Kauai and overlooks the Pacific Ocean below where endangered Humpback whales migrate to Hawaii from the North Pacific every winter to give birth to their young. The tall narrow pines are known as "Cook Pines", named after Captain James Cook. They were first classified by botanists during Cook's second voyage in the late 1700's.
Almost magical, Bali Hai, also known as the Makana Mountain, can be found in the Limahuli Gardens. The name for this peak means reward or “gift from heaven” in the Hawaiian language. The movie South Pacific released in 1960 featured this mountain as a forbidden but exotic island called Bali Hai. From that time on, the name “Bali Hai” has stayed with this special place, and if you use your imagination...maybe just maybe you can hear the gentle breezes coming from the mountain as if it is calling to you...as the legend implies.
Limahuli Gardens are truly a wonderful and magical place in which the flora, fauna and culture of the Hawaiian islands is nurtured and preserved. I hope you enjoyed the virtual tour out of the northeast to the gardens of the west Pacific.

Linking to Floral Fridays,Today's Flowers and Our World Tuesday.

Posted by Lee@A Guide to Northeastern Gardening at 8:00 AM 22 comments:

Spring is in the air as temperatures rise into the 50's and 60's and blooms start to appear in the landscape.  Last year at this time the gardens were covered under a blanket of snow, so what a difference a year makes. After a very unpredictable winter with record highs and lows and a few significant snow storms, spring is arriving early and is now full speed ahead. It's time for another Garden Bloggers' Bloom Day and Foliage Follow-Up, so come along with me on a tour of my Long Island garden. Get ready to see some early blooms!
Just this past week the weather has been dry and mild, and my Knock Out Roses are pushing out new growth a month ahead of time. Since some rainy days are in the forecast, I have been out in the garden pruning, as the new shoots on the roses are calling that it is time. March can be a very unpredictable month, but it looks like a continuous warming trend is in the future. 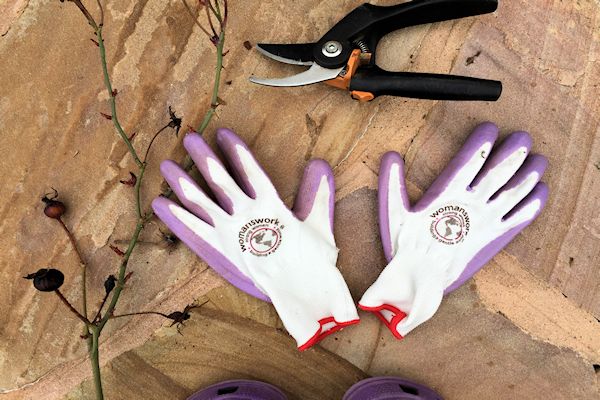 Pruning Roses Already!
Along the north side of the property, Hellebore 'Shooting Star' hasn't needed any type of maintenance. It is a reliable and hardy winter blooming perennial which I have been enjoying over the last two winter seasons.  This one has been blooming since early January, and is still going strong!
Alongside Hellebore 'Shooting Star' is Nandina domestica, which is showing its bright red berries that form in late fall.  It is one of the highlights in the late winter-spring garden.
Outside by the back patio, these Hens and Chicks in a ceramic planter have fared nicely.  I did bring them inside into the garage during the plummeting zero degree temperatures we experienced last month, but they are back outside now and doing well.
Surprise...surprise!  Here are the first blooms of the season and just in time for Bloom Day! I have been planting more spring blooming bulbs around the property over the past few years, and they have been such a delightful addition to the gardens. These yellow, purple and white crocus just opened...very early this year! 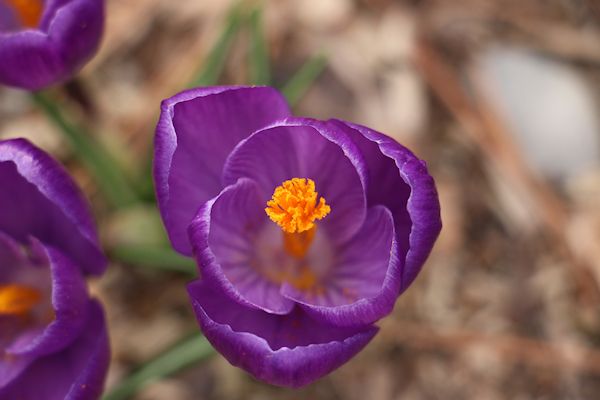 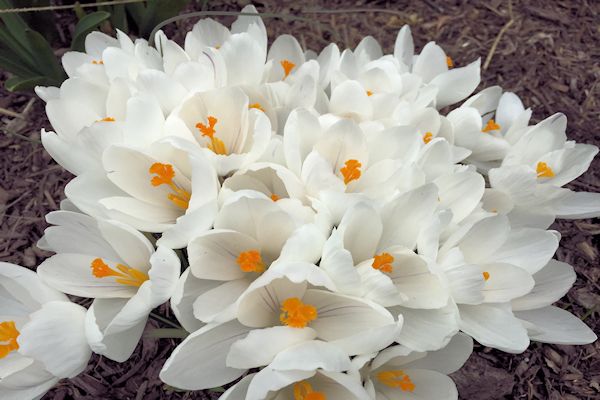 White Crocus
The Hyacinths are coming along right behind the crocus...
displaying flower buds already. There will be lots more blooms on the way, including Daffodils and Tulips!
Sedum 'Brilliant' is such a wonderful and carefree perennial, and I look forward to its perfectly shaped rosettes that emerge above the soil in late winter into early spring.

Posted by Lee@A Guide to Northeastern Gardening at 12:00 AM 46 comments: