Welcome to the beautiful Limahuli Garden on the north shore of the island of Kauai.  Limahuli Garden and Preserve is one of the National Tropical Botanical Gardens, located in the 1,000 acre Limahuli valley and the home to nearly 250 taxa of native plants and birds. Out of Hawaii’s 1200 native plant species about 114 are already extinct and approximately 50 or less individuals of the 300 native species are remaining in the wild.  Mostly all of the native plants in the Limahuli Gardens are extremely rare and known to be endangered.  The mission of the National Botanical Garden is to preserve the Limahuli Valley and its ancient Hawaiian plants in their natural setting and save them from extinction.  On a recent visit to the island of Kauai I had the extraordinary pleasure of observing and learning about the history of these gardens first hand…an amazing and unforgettable experience!


Known as Mandarin Orange in other parts of the world, Citrus reticulata (Tangerine) was brought to the Hawaiian Islands in 1825.

Olena (Tumeric Curcuma longa) is important in Asian cuisine but was traditionally used for medicine and ceremony in Hawaii and is still used in medicine today.

Cordyline fruiticosa (Hawaiian Ti Plant) was considered to be sacred by the early Hawaiians and the symbol of high rank and power. It was worn or carried in ancient ceremonies as protection from evil spirits and is still used today in modern rituals. It's waxy leaves repel water and have many uses.  In cooking they are used as a wrapper for storing and cooking food, in building as thatch for housing and in clothing for sandals and rain gear. Red varieties of Ti have been introduced to Hawaii and hybridized to produce many beautiful foliage colors and are reproduced from seed.
Hala is a native plant of Hawaii as discovered in 1993 when a preserved haha branch dating back to 1.4 million years ago was discovered in a broken lava rock near Hanalei Bay. Native Polynesians also brought over Hala to use for weaving into mats, baskets, flooring and pillows and also for the sails for their canoes.
The female Hala plant produces a fruit which resembles that of a pineapple. When ripe the cluster of fruit breaks into separate fleshy parts that were known to be eaten during times of famine. 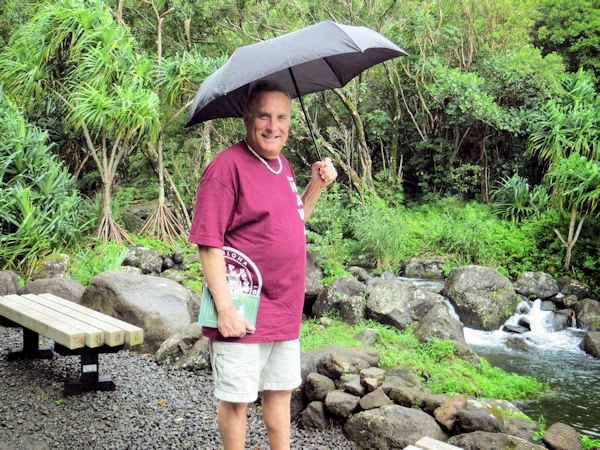 Limahuli Stream is a freshwater source beginning at the top of the valley at 3,330 feet (1,015 meters) above sea level and plummeting over an 800-foot (244 meter) waterfall before reaching the valley floor and continuing to the ocean.  Many unique animals and plants live in the Limahuli Stream including all five species of Hawaiian freshwater fish.  The value of freshwater to the Hawaiian culture is expressed in their language with wai meaning "fresh water" and lani being the word for "heaven,sky"; hence Wailani=heavenly water.
Araucaria columnaris (Cook Pine) was introduced into Hawaii as a landscaping and lumber tree and is the most common Araucaria species in Hawaii.  The striking foliage on these  trees resembles that of a Norfork Pine but finer and more wispy...just beautiful along with the mountains in the backdrop.

Alula is an unusual, almost prehistoric looking plant that is native to Kauai and extinct in other parts of the world.  Once found on the windswept sea cliffs of Kauai, Alula suffered a serious decline in population from Hurricane Iniki destroyed half the natural population along the NaPali Coast in 1992, leaving only one remaining growing in the wild. According to the U.S. Botanic Garden, the only pollinator for the plant was a now extinct "hawk moth".  Alula can now only produce seed when artificially pollinated by humans. Thanks to conservation efforts, the endangered Alula has been preserved in National Botanical Garden's Limahuli Garden and Preserve, saving the plant from extinction.


Originating from the South Pacific, Breadfruit or Ulu, as it is named in Hawaiian, was one of the few life-sustaining plants the Polynesians brought with them when they sailed to the Hawaiian Islands.  The fruit and seeds of all three species are edible and very nutritious filled with vitamin B, calcium and complex carbohydrates. When cooked the taste of breadfruit is described as potato like or similar to freshly baked bread. Ulu turns into a sweet and gooey fruit when very ripe but is more nutritional when unripe.  It also has many other uses as it has played a part in the making of construction materials, medicine, fabric, glue, insect repellent and animal feed.  Ulu is known as the "tree of bread" in Hawaii.
Here we are back at the visitors center.  If you are in the area of the north shore of Kauai be sure to give these magnificent gardens a look.  The views of the gardens are amazing and the staff are wonderful and very helpful.  Limahuli Garden was selected by the American Horticultural Society as one of the best natural botanical gardens in the United States and has both self guided and guided walking tours available Tuesday through Saturday 9:30-4:00 pm.  Since it is the windward side of the island and a tropical rain forest chances are it could be raining so bring rain gear just in case and enjoy!

I hope you enjoyed the virtual tour.  Visiting the Limahuli Gardens was like a journey back in time to a natural undisturbed rainforest with native plantings, a view of the misty mountains above and Pacific Ocean below...a majestic view that will take your breath away...an experience I will always remember.

Linking to Today's Flowers and Our World Tuesday.

Posted by Lee@A Guide to Northeastern Gardening at 4:56 PM