Here are some of the plantings that were used in the garden.   I used a combination of shade tolerant native evergreens, flowering shrubs and perennials to achieve a garden that would provide interest throughout all seasons and serve the function of providing an inviting pathway from one entrance of the property to the next. Below are some descriptions of each selection.
Inkberry is a hardy mid-sized evergreen shrub with glossy green leaves hardy in zones 4-9.  It prefers to be grown in full sun to partial shade and reaches a mature height and width of 4-6 feet. Small white flowers in spring are followed by black berries in fall.  This plant is known to be tolerant of a variety of conditions.
Posted by Lee@A Guide to Northeastern Gardening at 4:36 PM 14 comments: Links to this post

Spring took its time arriving this year with cooler than normal temperatures all the way through April. Then the month of May arrived with a warming trend that rapidly turned into a premature summer.  With temperatures rising into the 80's for a few days, an explosion of intense color suddenly made its way throughout the garden.  Now the hotter temperatures have settled into a more normal spring-like pattern with upper 60 to mid 70 degree days, but the heat was just enough to get everything back on track and all the blooms seem to be arriving at once!  Come along for a walk with me in my Long Island garden.

Posted by Lee@A Guide to Northeastern Gardening at 12:00 AM 48 comments: Links to this post 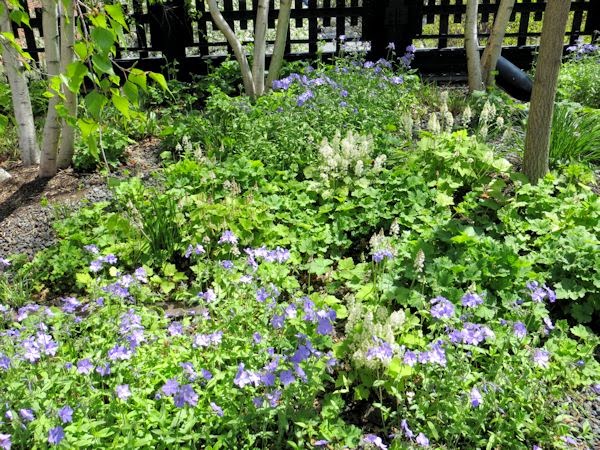 Posted by Lee@A Guide to Northeastern Gardening at 9:02 AM 8 comments: Links to this post