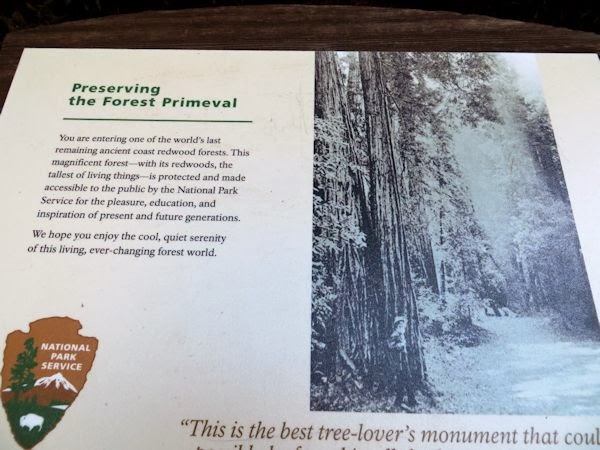 
Muir Woods National Park is a remnant of the ancient redwood forests that blanketed parts of the northern California coast back before the 1800's. William Kent and his wife Elizabeth Thacher Kent bought this land in 1905 in order to protect one of the last untouched areas of redwoods.  To protect the land the Kents donated the land to the federal government and in 1908 President Theodore Roosevelt used the 1906 Antiquities Act to declare the area a national monument which was later named after conservationist John Muir.
Muir Woods National Monument is located 12 miles north of the Golden gate Bridge in San Francisco, California. It consists of a 560 acre park with six miles of trails meandering through some of the last remaining redwood forests in the world.
Much of the Northern Hemisphere was covered with Redwood-like trees 150 million years ago.  Climate change caused the numbers or Redwood to decrease drastically leaving only two species in California.  While many of the world's redwoods were lost due to industrialization and nearing extinction the canyon of redwoods in Muir Woods was never logged and remains preserved here today.
The breathtaking Cathedral Grove represents trees ranging in age from 500 to 800 years with heights up to 258 feet towering towards the sky.  The main attraction of the Muir Woods is the Coast Redwood (Sequoia sempervirens) seen here, a relative of the Giant Sequoia which is known for its great heights.  The oldest tree existing in the park is over a remarkable 1,200 years old.
It is a beautiful sight as the rays of sunshine stream down through the canopy of trees into the park.  The lingering fog presents a misty appearance.
Many of the redwoods in the park are now petrified after hundreds and thousands of years...
with hues of purple and green ingrained into the wood.
This tree was hollowed out by a fire years ago and has become petrified into stone.
Many remains from the fire can be seen throughout this area in the park.  Wildfires frequently occurred every 20 to 50 years in  this area before fire suppression began in the 1800's. Controlled burning has been established to keep the integrity of the ecosystem alive as fire benefits the forest floor through the recycling of nutrients.
Below... the naming of the California redwood is explained.
The first written reference to redwoods was from a missionary in October of 1769 as seen above.
Beneath the canopy of redwood trees are California big leaf maples, tan-bark oaks,  red alders, Douglas fir and various species of ferns.  Redwood Creek flows through the park while several bridges cross over the calmly moving waters for visitors walking the trails.
The inside appearance of a fallen tree can reveal a lifetime of events.  Annual rings and fire scars on this tree can be seen showing the climate record and history of this redwood.  Generally large annual rings are a sign of plentiful rainfall and nutrients and much growth while narrow rings are a sign of stress and struggle for survival.

Posted by Lee@A Guide to Northeastern Gardening at 12:00 AM